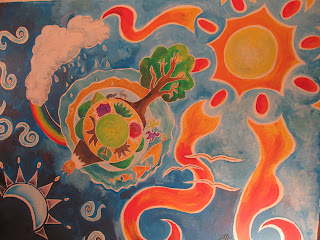 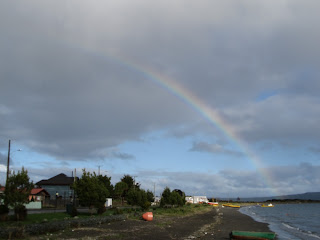 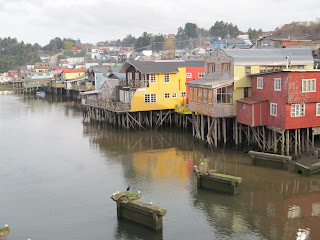 
The Pan-American Highway (Portuguese: Rodovia / Auto-estrada Pan-americana, Spanish:Autopista / Carretera / Ruta Panamericana) is a network of roads measuring about 47,958 kilometres (29,800 mi) in total length.[citation needed] Except for an 87 kilometres (54 mi) rainforest break, called the Darién Gap, the road links the mainland nations of the Americas in a connected highway system. According to Guinness World Records, the Pan-American Highway is the world's longest "motorable road". However, because of the Darién Gap, it is not possible to cross between South America and Central America by traditional motor vehicle.
The Pan-American Highway system is mostly complete and extends from Prudhoe Bay, Alaska, in North America to the lower reaches of South America. Several highway termini are claimed to exist, including the cities of Puerto Montt and Quellón in Chile and Ushuaia in Argentina. No comprehensive route is officially defined in Canada and the United States, though several highways in the U.S. are called "Pan-American".
The Pan-American Highway passes through many diverse climates and ecological types, from dense jungles, to arid deserts, to cold mountain passes. Since the highway passes through many countries, it is far from uniform. Some stretches of the highway are passable only during the dry season, and in many regions driving is occasionally hazardous.
Famous sections of the Pan-American Highway include the Alaska Highway and the Inter-American Highway (the section between the United States and the Panama Canal). Both of these sections were built during World War II as a means of supply of remote areas without danger of atta ck by U-boats.[citation needed]
Jake Silverstein, writing in 2006, described the Pan-American Highway as "a system so vast, so incomplete, and so incomprehensible it is not so much a road as it is the idea of Pan-Americanism itself…"[1]
(Taken from Wikipedia)


I return to Chiloé, the island in southern Chile, to kilometer 1 of the Pan-American Highway after ten years.  I am amazed by the changes.  Ten years ago,  the salmon hatcheries were just beginning to produce  for the global market.  Chile is now the second producer of salmon worldwide, with hundreds of hatcheries around the island of Chiloe creating jobs as well as high levels of pollution in the water.  Ten years ago, the Pan-American highway dwindled town to a narrow road with no shoulders and winding through fishing villages, but now, while still being two lane, it has shoulders, new bridges and by-passes.  Some things are still the same, though.  We still had to load the car onto a narrow ferry for a 30 minute ride across the Chacao Channel.  The construction of a bridge across the channel has been bounced from one presidential term to the next,  project after project dying in a mess of political excuses and debates.  The ferry ride is a great tourist attraction, but a challenge for the Islanders who must cross the Channel for many needs and services, including the nearest hospital.

Other changes I witnessed:


Island Changes
Pave the highway
and the supermarket replaces
the open air space where potatoes
are sold in square wooden tubs.

The casino becomes a warm, dry
money losing game, no more
cards or chess under the
dripping trees of the plaza.

The mall shoots skyward
four full floors of high heeled shoes,
pantyhose, ties and lipstick
for fisher folk to purchase
and lug home
to nests perched on stilts,
anxious to place the first satellite
dish and decorate the
quaint rooftops with
modernity.

From A Wisp of Wind 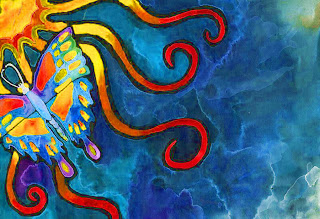 Can you believe that a butterfly fluttering its wings in one place can change the weather in another place far away?  I know it is true because I saw a butterfly do just that.

But she wasn’t always a butterfly.  She used to be a tiny caterpillar.  She used to hide behind the door and curl up in a little ball so that no one would step on her, or scream when they saw her, or even notice her.

One day after eating and growing, she spun a silky cocoon around herself.  She thought it would be the best place to hide.  Something happened. She was still herself, and yet everything changed. . .

When she came out of the cocoon, she could fly!  Everything looked different from up in the air.  She could see flowers, and trees, and beauty all around her.  She didn’t want to hide anymore.  The butterfly fluttered first close to home, and then she tested the strength of her wings.  She flew over the trees, and then over the mountains.  She even flew over the ocean.

She fluttered her wings and flew to another land where she met another tiny caterpillar.  He was frightened because he was nearly stepped on, and a little girl screamed when she found him crawling on her shirt.  No one ever noticed him, and he felt all alone.

The caterpillar had never had a friend, much less such a beautiful one as the butterfly.  He loved to watch her swoop and come to a gentle landing near him.  Even though he couldn’t understand the butterfly, he was very sad and lonely when she left.

He ate and grew, but he kept crawling on the ground hiding from all the big things that scared him.   Then one awful day a terrible storm came.  Now the caterpillar wasn’t just afraid, he was terrified.  He hid under a rock until a puddle nearly washed him away.  He hid under a leaf but it didn’t protect him from the wind.

He thought he would drown so he climbed on a branch and spun a cocoon to protect himself, but the storm became fiercer.  There was hail and lightening with big rumbling thunderbolts.   The wind was so strong it was going to blow the whole tree away with the branch and the tiny cocoon clinging to it.

Back in her home, the butterfly listened as the sun and the birds chattering about the storm in the land far away.  The butterfly knew in her heart that the caterpillar was in danger.  There had to be something she could do.

So, she fluttered her wings.  The air stirred around her.  Then she fluttered some more until she was beating a tiny wisp of a breeze.  Then the breeze whipped up stronger until it became a wind.  Then the wind traveled over the trees, the mountains, and the oceans until it had the force of a gale.  When it finally reached the far away land, it pushed the storm clouds until the rain and the lighting had to leave.  The sun came out warming and drying the cocoon.

Hardly daring to believe he was safe, the caterpillar came out of his cocoon.  Except he wasn’t a caterpillar anymore!  He, too, was a butterfly.  He stretched his wings and flew around looking at the world from far above.  He looked at the flowers and the trees, and beauty all around him. He no longer felt like hiding!

What about the butterfly?  She just kept fluttering knowing that her tiny wings were big enough to move storm clouds, and that in her heart there was more than enough love to help a caterpillar become a butterfly in a land far away.

To Carlitos, Jasmine, Aaron, Elenita, Alexsandra, Joel, Isaac, Benjamin, Andre, Evan, and Jonathan for the many times you have blown the storms away,

To those at the Shalom Center as you come out of the cocoon and learn to fly,

And to those all those who dream of Shalom, may you never stop fluttering your wings.
Elena Huegel 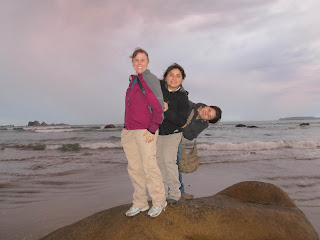 I am the weight hanging on a chain linked to God.
God sustains to center point, while
I swing from end to end.

I extend to the tip of the arc;
God tugs back, firmly attached to my middle
and holding on to me way out at the end of the stretch.

I fling past the medium,
barely catching my balance before I am off again,
flying further up and further away on the other side.

Will the waltz slow as I grow old?
I want to believe that the connection to heaven will tenderly guide me
with grace to perfect equilibrium.