About 30 minutes ago there was another strong, but not devastating earthquake in Chile.  It was near Talca, where the Shalom Center offices and my home are located, and lasted about 45 seconds.  Most of the members of the Pentecostal Church of Chile where at worship since the church there has services on Sunday evening.  I received an email immediately from Débora Martínez from the Talca church.  She said that there does not seem to be severe damage, but as one can imagine, many people were triggered by the reminder of the 2010 earthquake.  As I leave to Chile tomorrow, I ask for your prayers for the Shalom Center and the Pentecostal Church of Chile as we continue with the trauma healing and resilience development programs.
Publicado por Colibrí en 17:21 No hay comentarios:


Control we never had

We work, we play
We think we have it together
Then one day
We are forced to let go
of the lies and recognize
Life is fragile.
We gather
our memories and our hopes,
in a basket made of grass
that withers before the future is past.
Then bit by bit
control slips from our hands
and we choose to ride
the wild winds
or hold fast, fingers clenched
white lipped, fear hanging
to a tree limb above the cliff.

I will let go and ride the wild winds on Monday as I climb into the plane and fly overnight back to Chile.  I ask for your prayers as once again, I let go!  As the Rev. BTP wrote before my new commissioning as a missionary last week:

Could you have imagined five years ago, that your primary ministry for these past years, would have been to help to lift people up after the earthquake?  And yet, you were able to because of all that had gone before...(the Shalom Center, the trauma training, the relationships of trust you had built).  So when the moment came, you were ready.

I can't even imagine what these next four years will bring.  Here is my prayer.
O Creator of all things, Wisdom of the Universe, the one who speaks through the magnificence of the natural world around us, be with Elena and sustain her.  Give her spaces in each day, so that she can see you in the commas and periods and question marks of her daily rhythm.   Grant her moments of listening and work and accomplishment, and moments of play and quiet and renewal.  Give her times of plenty and abundance, and times of want and simplicity and emptiness.  Bring music to her ears, and silence to her heart.  Give her companionship, and the companionship of your company.  Guard her family while she is away from them, that she might be released to serve you.
Let her "yes" be an unequivocal "yes" for those things she is called to do, no matter how difficult they might be; and let her "no" be a resounding "no" to those things she is not called to do and be.  And grant her the wisdom to know the difference between the two.

We ask all these things in your holy name,

Sept. 14, 2011
Elena Huegel
I see your tears tonight
as I tell you the stories
of children in far away places.
For a moment, in the midst of my words
you were there with me,
hugging and comforting,
listening and praying.
You traveled without leaving
the church pew to meet
people you never knew
but whom touched
the deepest empathy in you.
For a few steps,
you walked in my shoes.
and that was my intent;
to lend you my shoes
and let you kick up
the dust where so many have gone.
You have walked in my shoes.
My hope is that you will
never be the same. 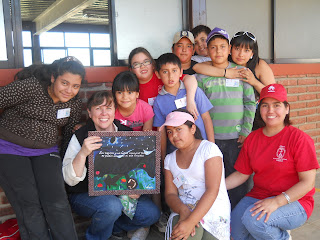 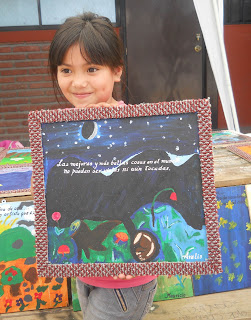 The heavens keep telling the wonders of God, and the skies declare what he has done. Psalm 19:1

There was a full moon that cloudless night.  The silvery light cascaded down from the heavens casting a glow over the cracks that opened up in the ground, the boulders that broke loose from the mountains, and the water that rose up from the ocean and hurled itself against the shore. The moonlight did not quiver when the earth shook.

The children remember the moon.  They camped out in its light either because their homes were gone or because their parents were wary of moving back inside with the constant aftershocks.

“We didn´t have electricity, but it was ok because the moon was very bright.”

“My grandfather told us stories every night, and it was better than watching television.”

“Whenever I see the full moon, now, I remember the earthquake.”

The mission of the Shalom Center is to respect, care for, and transform the relationships between God and each human being, of each person with him or herself, between people, and with all of creation.  In Chile after the devastation caused by the natural forces of the earthquake and tsunami, many children and adults lost their confidence in the stability and security of the ground and the water and needed to renew their relationship with the earth.  At the Shalom Center, we hope that the beauty and tranquility of nature can also be a source of healing.

Nine full moons after the natural disaster, more than a hundred children from the “Creacción” environmental education clubs formed by the Shalom Center in schools and churches gathered for a day of  “re-creation” to renew their relationship with the earth.  The children chose to participate in several of many different play-workshops including “Water, the source of life,” “Dirt made my lunch,” and “My garbage talks.” At noon, each group prepared an exhibit of what they had learned during the past months in their separate clubs.  The children from the village of Tutuquén Bajo captured their impressions and feelings about the environment in paintings.  The boards and the frames for the paintings were salvaged from materials either discarded from destroyed buildings or left over from the reconstruction. All of the children in Tutuquén Bajo lived outside after the earthquake and watched the moon wane as days after the earthquake turned into weeks.

Arelis painted the moon shining down on the snow capped Andes Mountains.  The night is not frightening.  It is a place where animals sleep in warm safe burrows, flowers bloom and mushrooms suddenly sprout. The trunk of a chopped tree biodegrades and enriches the soil green with new life. Across the painting, Arelis wrote one of my favorite quotes from Helen Keller: “The best and most beautiful things in the world cannot be seen or even touched - they must be felt with the heart.”