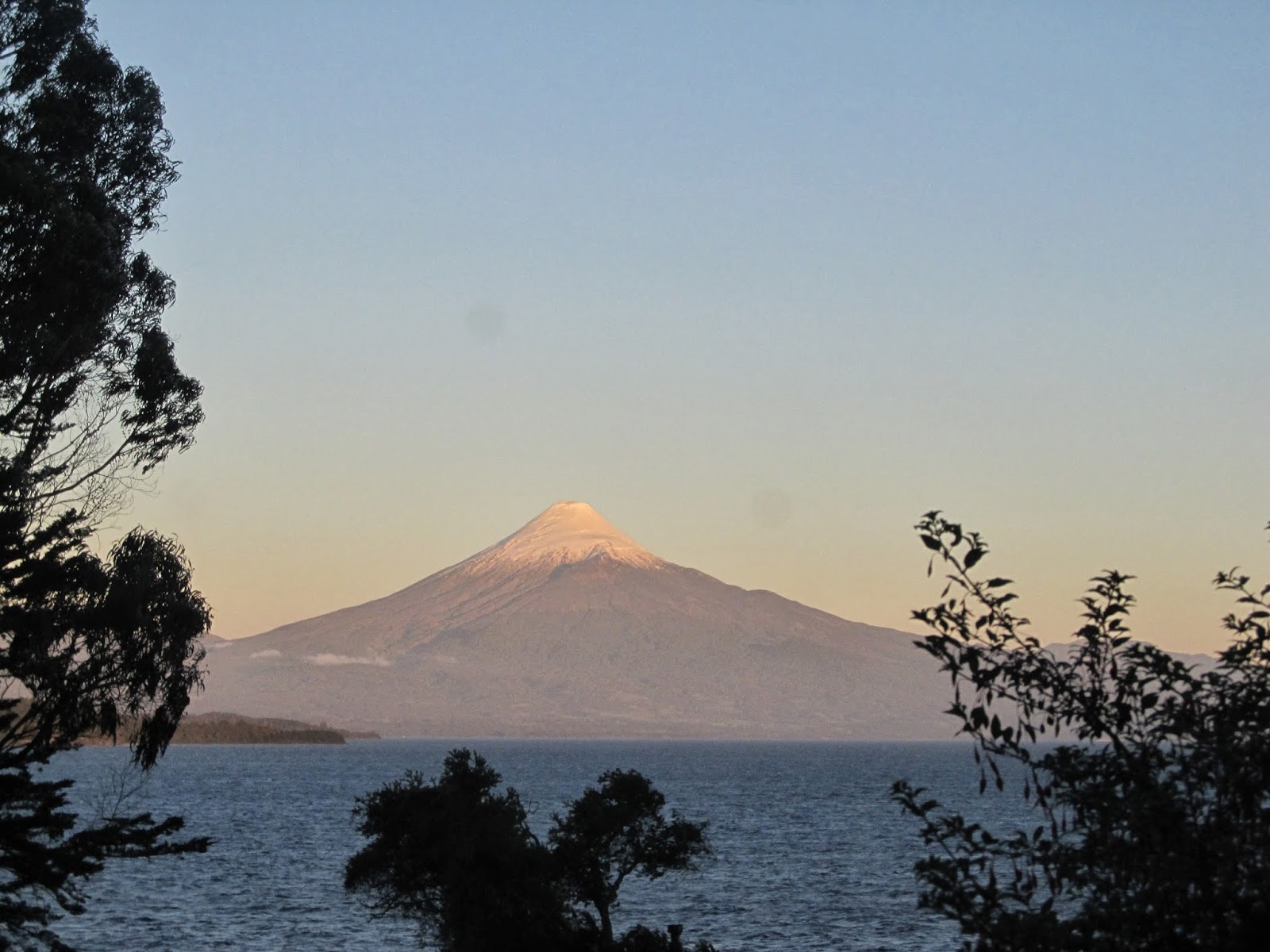 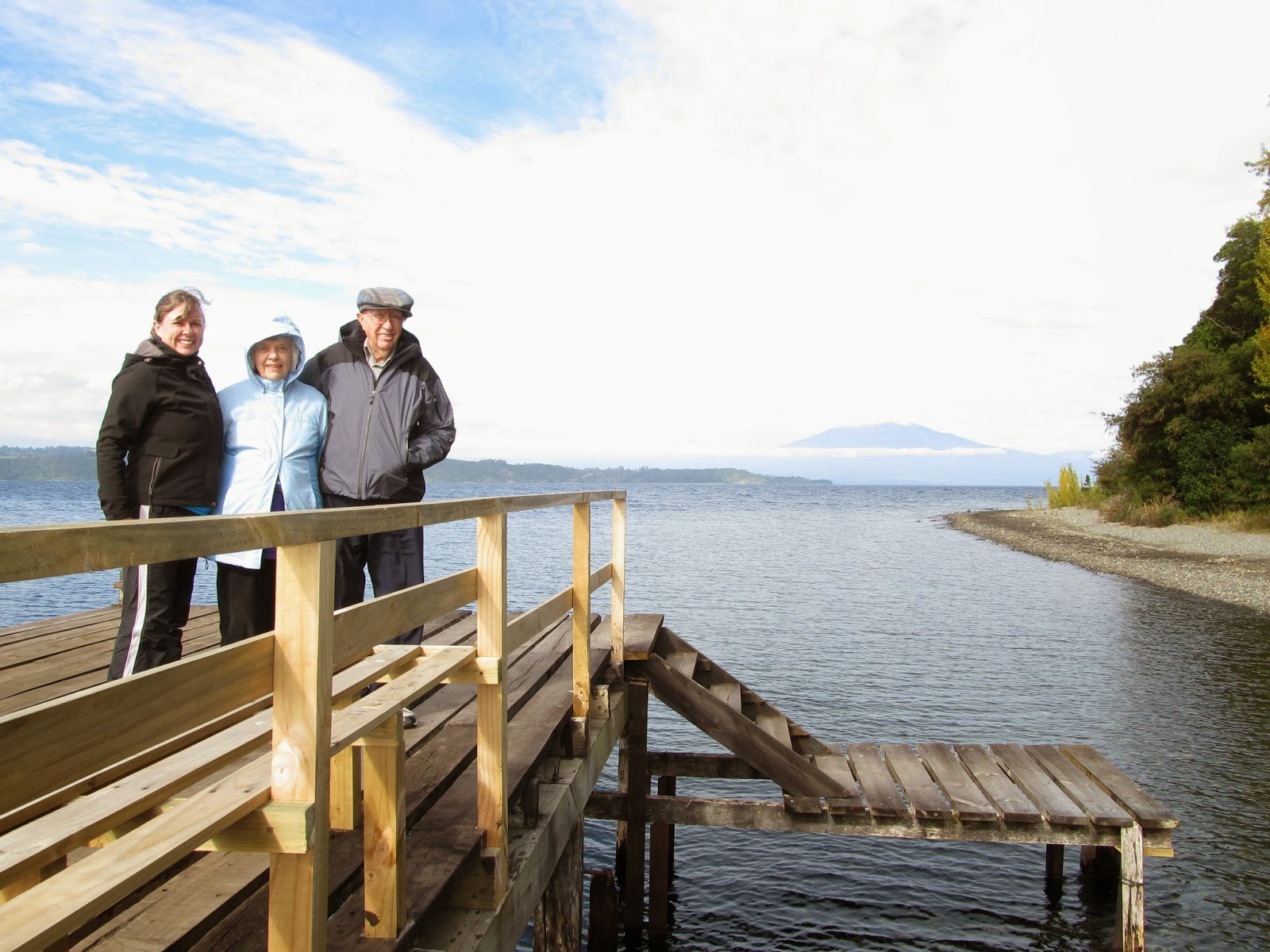 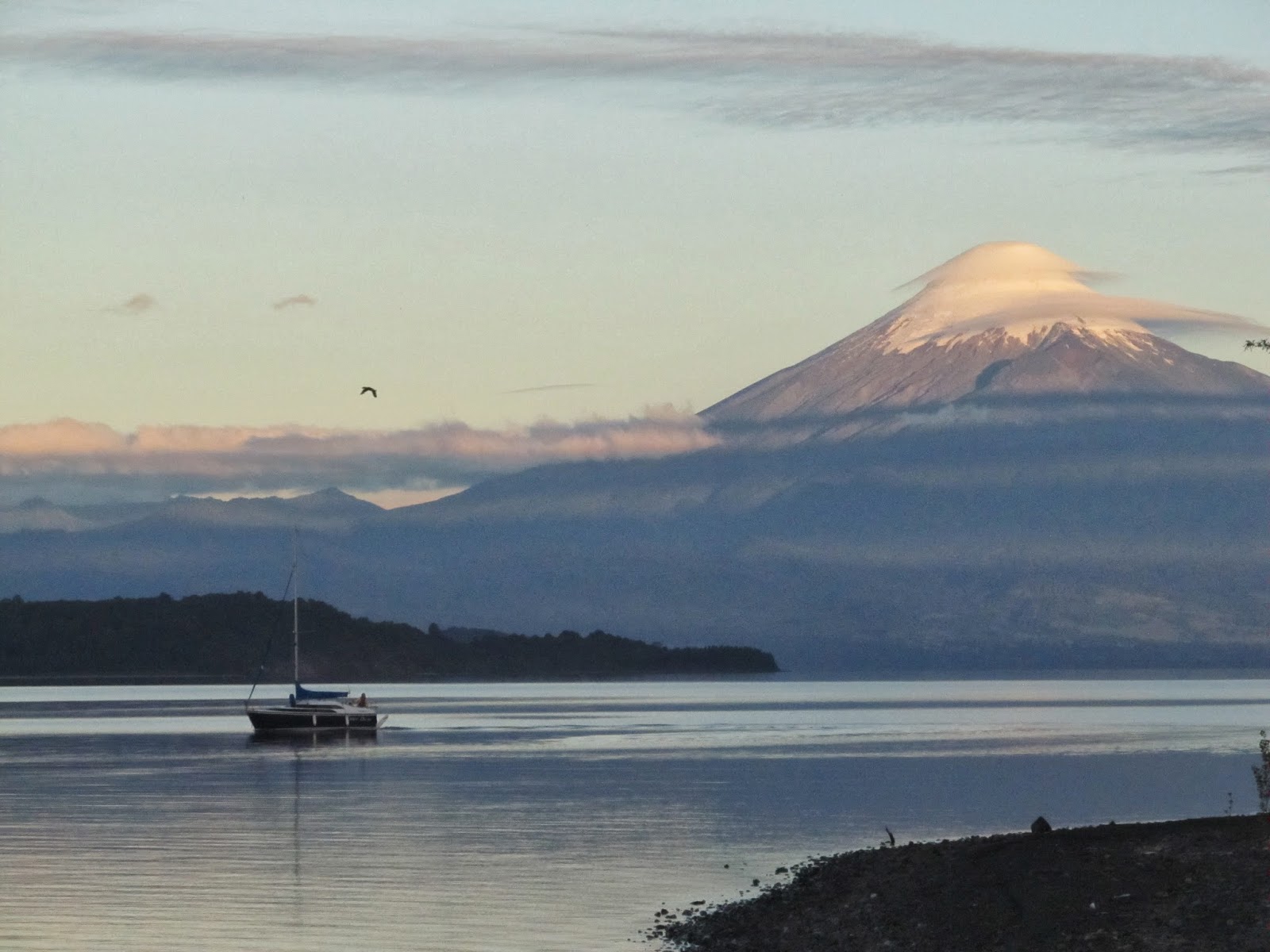 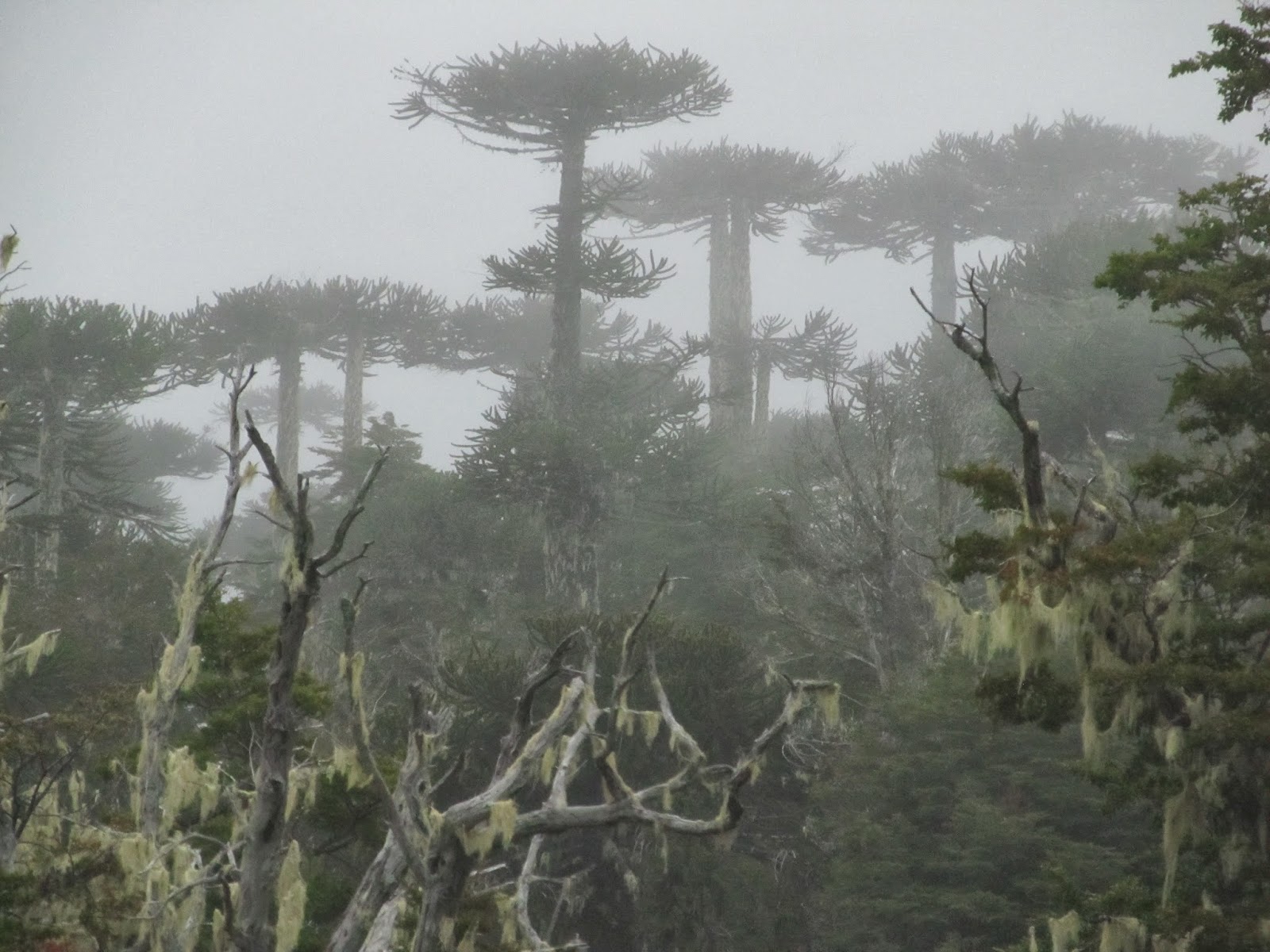 On Monday, March 17, we traveled on the Pan-American Highway 500 miles south to Puerto Octay.  This is as far south of the Equator as Seattle is north, so it was much colder there.  We stayed in a cabin on the edge of beautiful Lake Llanquihue.  Across the lake, we could see the imposing Osorno Volcano, which looked just like Mount Fujiyama.  We were able to see the different faces of the volcano as the sun and the clouds changed positions.  We especially enjoyed seeing the snow on the volcano change in color from white to pink at sunset.  I attach photos that Elena took.
The hotel next to our cabin was built in the early 1900's and once was visited by the Prince of Wales, who later became King Edward VIII of England.
We discovered that the town of Puerto Octay had early German settlers and even located a Lutheran church.
On the way back to Talca, we traveled through extensive plantations of pine and eucalyptus trees planted by forestry companies to promote the lumber industry.  We visited a national park where we saw the amazing araucaria trees, some over 1,400 years old.  They look like prehistoric trees whose pictures we see in scenes with dinosaurs.  We spent the night in a cabin on Lake Lanalhue.  The next day, we had lunch in a restaurant overlooking the Pacific Ocean.

Second entry from Trip to Chile

For The Helper;  Good news, bad news:  I have some good news for you.  Saturday my hands got warm.  Let me tell you  how that happened.  John Charles,  the President of the Board of the Shalom Center, and his wife Susana, invited us all to Panimavida.  This is one of the many spas scattered throughout the country with warm springs fed by volcanic heat. The spa is a large complex, with hotel, restaurant, and swimming pools.  When I visited this place some years ago it was run down and dilapidated  and had seen its better days.  But it has now been restored and is beautiful with well kept gardens and flowers all over.  We spent the day in a large heated pool.  I even got a chance to sit in a hot jacuzzi, and lo and behold, slowly my hands got warm. We had a wonderful buffet lunch and in the afternoon soaked some more and even got a taste of a turkish bath.  After that I really had warm hands.
Now for the bad  news:  Yesterday, I was invited to preach at the local church.  Everything went well but when I greeted people at the close of the service, one lady said, Oh,what cold hands you have.  So I guess I am back to normal.
We leave in a few moments to travel 500 miles south to the lake district.  Pastor John

Visit from my parents

My parents arrived in Chile for a three week visit.  My father is currently doing a "pulpit supply turned interim" at St. John's UCC in Rosenburg, Texas.  Since he will be writing messages to this congregation about his visit in Chile, I thought I might share his perspectives with you.  Enjoy!
Shalom
E


Report No. 1  To our  dear friends at St. John’s -I am not going to send you a report each day, but I must tell you about our first day in Santiago,  Chile.   After breakfast at the hotel, Elena took us to the subway station where we caught the train going downtown.  The subway car was full and when Yvonne and I stepped in the car two people immediately stood up to give their seats.  The exact same thing happened on the way back to the hotel.  Elena explained to us that it is customary for people to get up and give their seats to elderly people.  Can you  imagine this  happening in New York City?
At the main station down town we got off and Elena pointed out that on the walls were large paintings of the most beautiful scenes in Chile, snow capped peaks in the Andes, beach scenes, volcanoes and lakes.  These extraordinary paintings look almost like photographs.  A Chilean artist was commissioned to paint these and they are a wonderful exhibit in a subway station for all of the  people to enjoy.
We walked around downtown and went to the National Palace, the equivalent of our Capitol, and since it was the day after the  inauguration of the new president of the country, a woman, there were guards still at the doors of the palace and the red carpet where she  and other dignitaries entered still in place.
We caught a three  o’clock bus to ride four hours south on the Pan American highway to Talca, where Elena lives.  The bus was a two story luxury affair with very comfortable seats and an attendant who served us light refreshments.  The bus and the service were far superior to that offered by Greyhound.  Sort  of amazing!


The weather is delightful.  I am thawing out.   Pastor John
Publicado por Colibrí en 19:12 No hay comentarios: 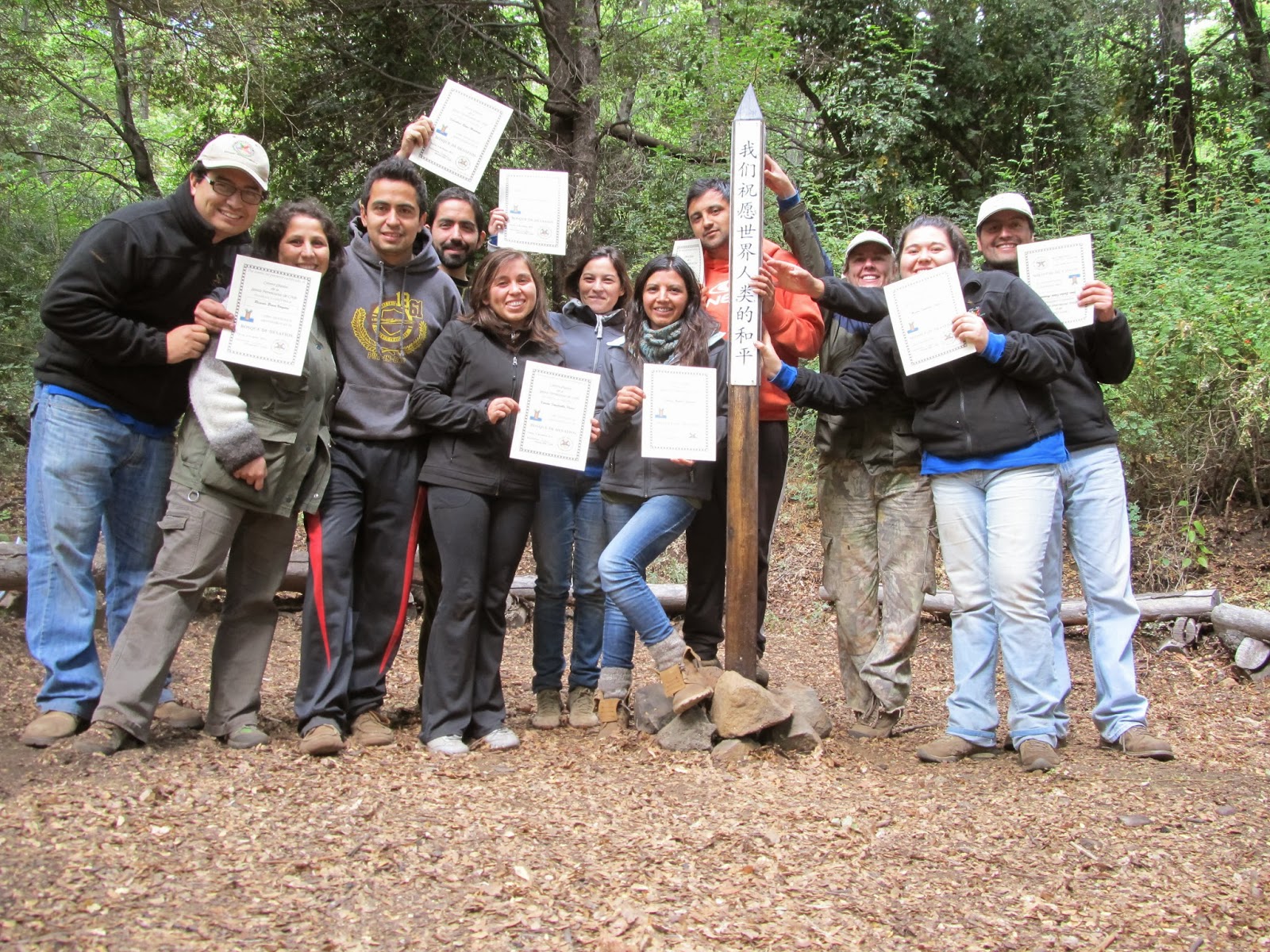 A dream come true!  This weekend, I trained nine young adults to be the first generation of Challenge Course instructors for the newly built low-elements and initiative games course at the Shalom Center.  I have wanted  for many years to introduce this valuable educational tool into the programs at the Shalom Center and am looking forward to observing these young people as they  find ways to strengthen the peace education, environmental education and christian education components of camps, retreats and gatherings. 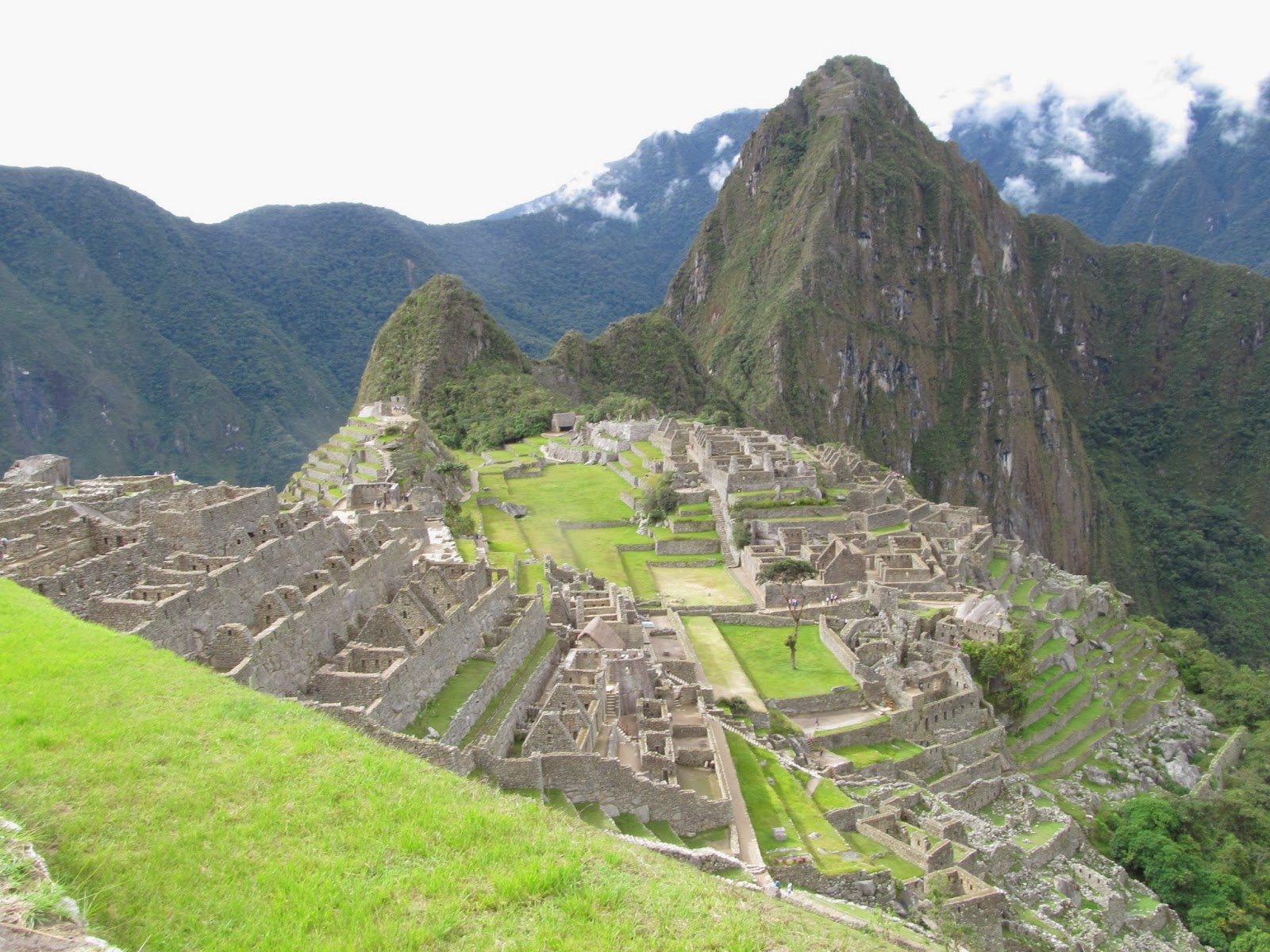 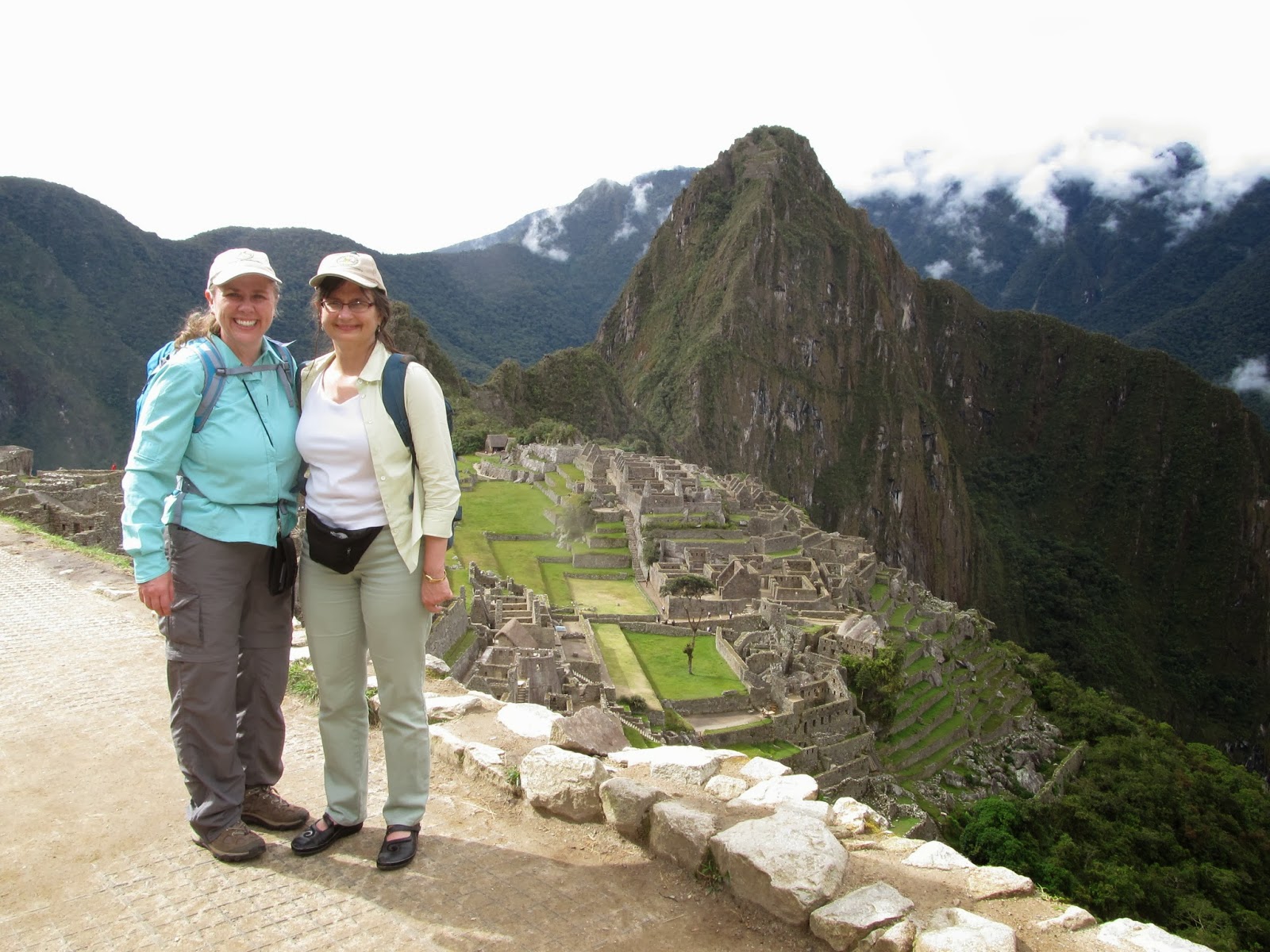 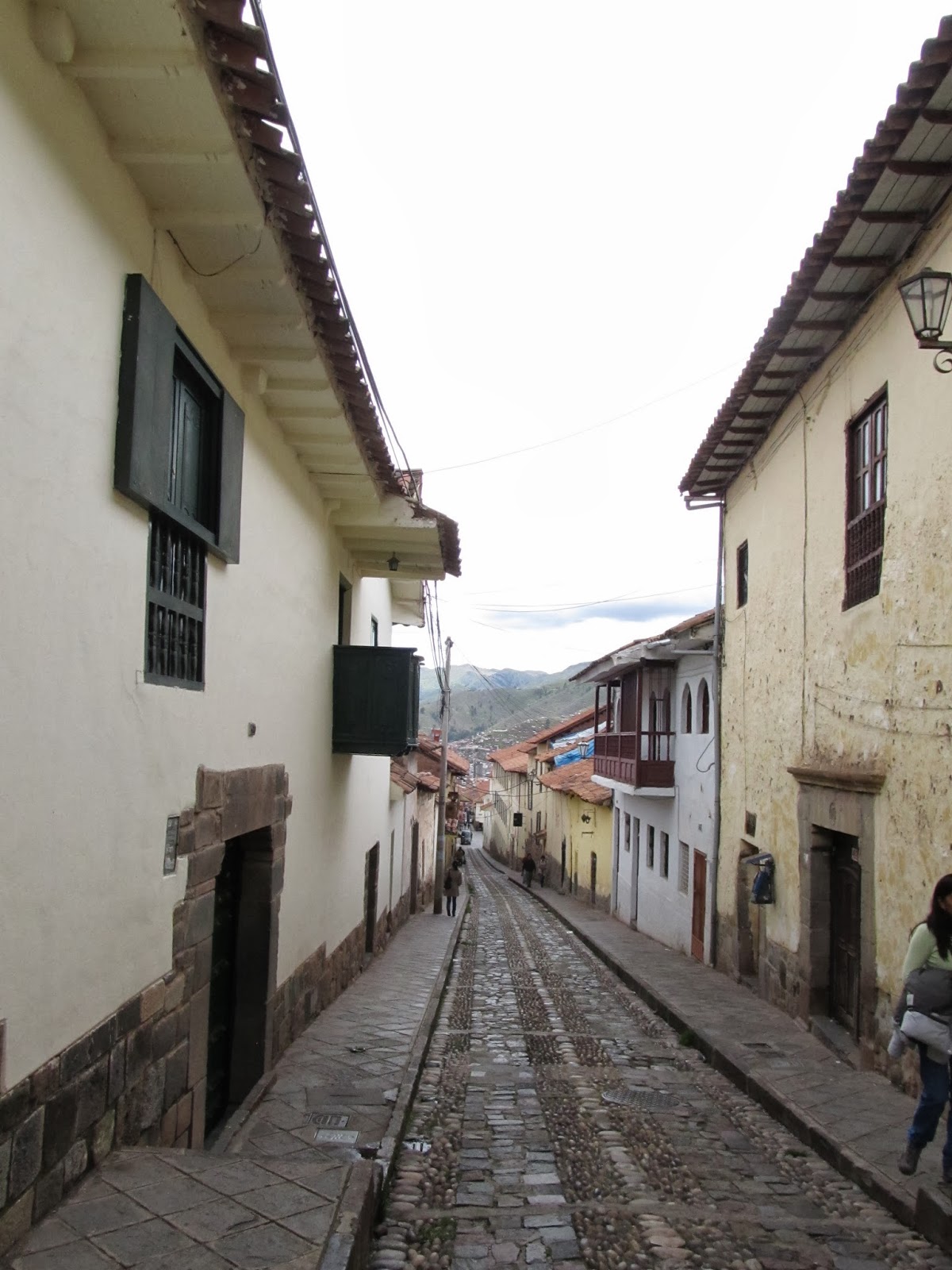