Temper Resilience of the Soul 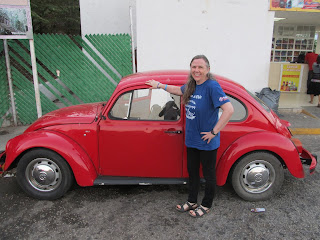 Temper  Resilience of the Soul
by Elena Huegel
It is six o'clock in the morning, and Alberto, Enrique and I are loading workshop materials into the tiny trunk at the front of the car.  The things don't fit, so we fill the half of the back seat behind the driver, and then Alberto folds himself into the other half, gallantly leaving me the front passenger seat where my shins bump against the underside of the dash board.  As we roll down from the cool mountains of San Cristobal de las Casas, Chiapas, to the humid heat of the coastal lands heading first west and then north, we keep our sense of humor by remembering all the Volkswagen Bug jokes we can think of...  "Everything in a VW makes noise except the radio..."  "How many elephants fit in a VW bug?"  We are on our way to Juchitán de Zaragoza, Oaxaca, the epicenter of the September, 2017 earthquake, 5 hours away in a "normal" car, six and a half hours in a classic 2002 red VW beetle.

Lesson 1: Temper resilience of the soul by nourishing a healthy sense of humor.

Besides the VW adventure, this trip was different from my other travels to the Isthmus of Tehuantepec.  Though we have often seen the light trucks towing damaged used cars south from the US across Mexico to Central America for repair and sale, this is the first time we have seen large numbers of people walking north along the side of this particular highway from Central America across Mexico to the United States.   In the past, we have seen lone travelers or pairs, but this time there are families, women and baby carriages, children as young as two, as well as groups 25 to 150 men,  all walking in the blazing sun past the mango groves.  Since the Bug advances slowly, I am able to distinguish the pleading looks of anguish and despair from the blank glances at our obviously full vehicle.    These people are part of the next "migrant caravan,"  individual hopes and dreams herded together into a homogenous mass whose fate can be discussed and decided upon in political debates from a safe, impersonal, distance.  A woman, nicely dressed, with a baby in a sling across her  front and two preschool children toting tiny pink and blue school packs clinging to her hands, stares at me with determination as well as distress when we go by.  What can I do? The exchange of recognition is past in an instant.

Lesson 2: Temper resilience of the soul by recognizing the dignity in the other, the worth of God's precious creation, even in the fleeting vision of a passerby.

In less than two hours along the northern coastal highway, we are stopped four times:  first by the Federal police, then by the Immigration Officials, then by the National Army and finally by the State Police, and at each stop we are questioned before we are allowed to continue on.  Traveling south, on our way home when we finish our work in Juchitán, we will not be stopped a single time.  All the pressure is on those  bound northward to the Mexico - USA border.

Lesson 3: Temper resilience of the soul with patience.

Under the shade of a bridge, a large group of men gathers in a haphazard circle.  Several Federal police cars are there, emergency lights flashing.  I can hear the wail of an ambulance siren in the distance.  A lone shoe lies in the middle of the highway.  Again, there is nothing I can do except say a prayer as I turn away from this story, yet another tragedy that might not even make it into the statistics of those who have died striving for their northern dream.

Lesson 4:  Temper resilience of the soul by pausing to discern where and when to seek justice, when  to love kindness or when to walk humbly on knowing one is not God.

Over the crest of a hill, electricity generating turbines stretch out in orderly rows as far as the eye can see.  The Federal Electricity Company has decided that the Tehuantepec Isthmus, which has the greatest sustained winds of Mexico, would be the perfect place to invested in clean and sustainable energy.  Today, the little red Bug is buffeted by winds up to 100 kilometers (about 60 miles) an hour, and Enrique has his hands full keeping us on the road.  Not all that glitters is gold and there is disaster even behind this massive project presented by the Mexican government as an example of its environmental commitment to lowering greenhouse gases.  "The turbines function optimally with constant wind speeds between  20 and 50 miles per hour and must be shut down with excessive wind speeds so as to not burn out the motors," explains one of the locals,  "but climate change is creating greater oscillation between very high winds and very low winds.  The unpredictability is disastrous for electricity production.  If the trend continues, the production of electricity will not pay back the millions invested in the project. The water table is the greater  disaster, however.  Each turbine is between 100 and 360 feet high and in order to withstand the force of the wind, must have a square block of cement underground at least as deep and wide as it is high.  There are over 1600 generators in about 2000 acres of wetlands between the coast and the mountains in Juchitán.  Rainwater can no longer percolate through the cement to the water table and the fresh water wells in many communities have gone dry."  A local pastor who is also a high school science teacher tells me, "We have believed the fallacy that when we create one environmental problem, another technological advance will save us; hence we don´t have to change our habits, back track from our "improved" way of life, or implement long range plans to restore and care for critical ecosystems because some new invention will "correct" our past mistakes."  Neither global nor local ills are healed with quick fixes.

Lesson 5: Temper resilience  of the soul through slow, thoughtful care, like the seasonal nurture of garden flowers. Avoid quick fixes.

The course I am teaching in Juchitán is "Odyssey of healing: hope for individuals," the last in a series of four courses before the final facilitation training course in the Roots in the ruins: hope in trauma program initiated with a group of lay leaders and pastors shortly after the 2017 earthquake.  My co-facilitator, Pastora Noemí Santiago, the coordinator of the Church of the Nazarene Seminary, Juchitán Branch, is unable to accompany us for reasons beyond her control.  The day before the course was to begin, as she was checking on the replacement of the large windows in a church damaged during the earthquake, one of the frames slipped and fell breaking her forearm in two places.  When the doctor told her she needed immediate surgery, she said "I can´t, I have to teach a trauma healing course this weekend!"   The mark of a good leader, however, is what people do when she must step aside.  The course continued on with students and pastors from the Seminary taking over the organizational and administrative tasks with great responsibility and the course participants gently caring for each other lightening my load as the sole facilitator.

Lesson 6:  Temper resilience of the soul by creating safe space where all can thrive and form a counter balance on which one can lean when bending in hurt or pain.

Final thoughts at the end of the weekend:
In my life in Mexico, I can´t control what happens, and most of the time, when my instincts kick in, and I can hardly control how I react.  I can, however, reflect on the circumstances of a situation, on my actions and those of others, and on what I can do or can´t do in the aftermath.  I, thereby, slowly gain more control of my feelings and attitudes while accompanying others in their own healing.   This process of tempering my soul is at the core of my resilience.

I have been meditating on the process of tempering as related to metallurgy in relation to soul resilience. Wikipedia says the following:
Tempering is a process of heat treating, which is used to increase the toughness of iron-based alloys. Tempering is usually performed after hardening, to reduce some of the excess hardness, and is done by heating the metal to some temperature below the critical point for a certain period of time, then allowing it to cool in still air. The exact temperature determines the amount of hardness removed, and depends on both the specific composition of the alloy and on the desired properties in the finished product. For instance, very hard tools are often tempered at low temperatures, while springs are tempered to much higher temperatures.
·   Strength: also called rigidity, this is resistance to permanent deformation and tearing. Strength, in metallurgy, is still a rather vague term, so is usually divided into yield strength (strength beyond which deformation becomes permanent), tensile strength (the ultimate tearing strength), shear strength (resistance to transverse, or cutting forces), and compressive strength (resistance to elastic shortening under a load).
·   Toughness: Resistance to fracture. Toughness often increases as strength decreases, because a material that bends is less likely to break.
·   Hardness: Hardness is often used to describe strength or rigidity but, in metallurgy, the term is usually used to describe a surface's resistance to scratching, abrasion, or indentation.
·   Brittleness: Brittleness describes a material's tendency to break before bending or deforming either elastically or plastically. Brittleness increases with decreased toughness, but is greatly affected by internal stresses as well.
·   Plasticity: The ability to mold, bend or deform in a manner that does not spontaneously return to its original shape. This is proportional to the ductility or malleability of the substance.
·   Elasticity: Also called flexibility, this is the ability to deform, bend, compress, or stretch and return to the original shape once the external stress is removed.
·   Impact resistance: Usually synonymous with high-strength toughness, it is the ability to resist shock-loading with minimal deformation.
·   Wear resistance: Usually synonymous with hardness, this is resistance to erosion, ablation, spalling, or galling.
·   Structural integrity: The ability to withstand a maximum-rated load while resisting fracture, resisting fatigue, and producing a minimal amount of flexing or deflection, to provide a maximum service life.
https://en.wikipedia.org/wiki/Tempering_(metallurgy)